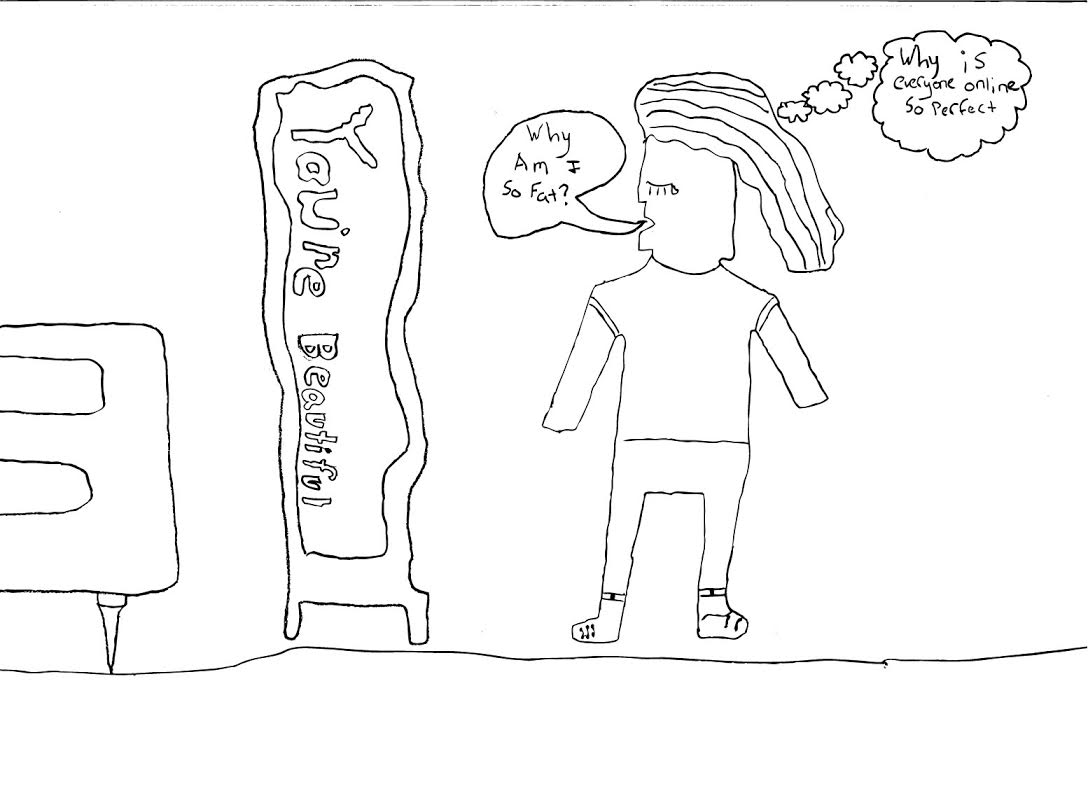 The Image of the perfect human has been around for hundreds of years.

Male and female strive to be the best person they can which is completely normal.

Perfection has changed throughout the years.

People have been socialized to put themselves through hell and back to be perfect. Now we have the weapon of social media that can hurt. What happens when someone can’t achieve perfection? People begin to hate themselves and how they look. This normally happens in teens from ages 13-19. Teens and social media are often closely intertwined and I feel this doesn't help. As social media’s following gets larger and larger, will the problem continue to get worse?

The Push for perfection online destroys the teen self-esteem.

The teenage brain is constantly developing and taking in new information. My brain is soaking up more information than the average adult. The brain stops developing in between ages 25-30. The most rapid time for development is in between 7 and 15.

Nearly everyone I know from age 12 to 17 has some form of social media. If you have ever been on social media you know that you often are blasted with ads of models and famous people. This exposure at a young age can lead to negative side effects. 1.5% of women in America women suffer from bulimia and .3% of these are teenagers.

Instagram made me anorexic is a short film made by Minute videos. The video is about a young girl striving for greatness in college and how she is stumped by Anorexia. Through high school, the young girl focused on academics more than her appearance. When she got to college boys began to fat shame her daily through Instagram and in real life. This pushed her to make the center thing in her life her body. The problem then got so bad that she was diagnosed with anorexia. She had to drop out of school temporarily so she could recover. She learned that people's opinions don’t matter and she should love herself.

This story is an example that social media can be a weapon to cause self-hate. When people push others to be someone they are not, it shows evil and lack of integrity.

Social media can be used as a weapon for hate and bullying. Bullying and social pressure can make someone into who they are not. The pressure to fit and be accepted in not taken likely.

During Middle school, the only thing that I was concerned about was fitting in and being accepted. I decided to try and break off and be my own person, I was met with crudeness and rejection.

Before I would go to bed at night I would get messages from people saying that I was worthless and I didn’t matter, all because I was different from the norm. Social media apps that were meant to express yourself and share your life were used as weapons. The same thing happens to many other people, people who differ from the norm.

During this time I thought nothing of myself. I feel that not complying with the social hierarchy made me happy and when I realized that I do accept myself I became happier. During this time of my life, social media was used as a weapon to break me down.

Cyberbullying is an epidemic that has swept the world in the last decade. Cyberbullying is any form of harassment but through a form of technology, the most common being social media. Megan Meier was bullied to suicide through various myspace accounts. Megan's death created great awareness and started the Megan Meier Foundation.

Cyber Bullying is affecting only adolescents and the pushers sometimes are not even aware they are doing it. 75% of teens say they have been cyberbullied and the same amount say they have participated in cyberbullying.

Social media is meant to be used to share your lives across the world and connect with others. society is abusing the power of social media and using it as a weapon of hate to make others who they are not, forcing them to be perfect. Humanity needs to use social media as a positive influence on society, not a weapon.

Reflection
In my Op-Ed, I covered how social pressure and influence online is depleting teen mental health. Cyberbullying an unwanted influence. I researched lots of statics and accounts of social media-induced mental health problems. Majority of my Op-Ed is covering how social media is being used as a weapon for hate rather than a way to show your life to others.
I learned that social media is being used for worse things than better. I also learned a lot about how constantly looking at the lives of other through windows like social media can cause one to value their own life, causing severe depression. Social media can portray others lives better than your own feeling empty. This project really opened my eyes to the disadvantages of social media.
My first draft of my political cartoon you could tell I was stressed about the way my drawing looked. I decided for my second draft I decided to take a much more relaxed approach to my drawing and I feel that it definitely benefited me. I then took the same approach to my final draft.
The style of writing in Op-Ed’s is very different from what I am used to writing. I am used to writing long paragraphs with multiple ideas,  but the Op-Ed style of writing is completely the opposite. I feel on my first draft I really struggled with that style of writing. On my second draft, I was able to properly format my Ideas into a more Op-Ed style of writing. Then my final two drafts were general refinement.